The present German number plate format, used since 1994, uses black print on a white background and first provides information about the country where the car is registered, in the form of a D (for Deutschland) on the blue strip on the left, like many European Union number plates.

After that, there are between one and three letters which show the city or region where the car is registered. DD stands for Dresden, D for Düsseldorf and MST for Mecklenburg-Strelitz, for example. These units usually coincide with the German districts, in few cases an urban district and the surrounding district share the same letter code. Hanseatic cities may have an H in front of them, e.g. HH for Hansestadt Hamburg or HRO for Hansestadt Rostock. The number of letters in the city/region prefix often reflects the size of the city: one letter for a large city (B= Berlin or H=Hannover) two for a medium-sized city (DD= Dresden) or three for a small city (MST=Mecklenburg-Strelitz).

After the location name come the emission test and vehicle safety test stickers, then one or two usually random letters followed by one to four usually random numbers. The total quantity of letters and numbers on the plate is never higher than eight. One letter with low numbers are normally reserved for motorcycle use since the plates space of this vehicles is smaller.

Car owners can personalize their plates by choosing certain numbers or letters instead of the random ones at the end. For example, people living in the town of Pirna might choose PIR-AT 77, “Pirat” being the German for “pirate”; another favourite is BAR-BQ 777 for Barnim. Various combinations that could be considered politically unacceptable, mainly due to implications relating to Nazi Germany, are disallowed or otherwise avoided. The district Sächsische Schweiz uses the name of its main town, Pirna, in its code PIR, to avoid the use of SS, the name of the paramilitary organization; similarly SA is also avoided. In 2004 in Nuremberg, a car owner was refused a number plate beginning N-PD because of the connection to the political party, the NPD.

Example of banned combination (“NS”) which has been issued accidentally.Other banned combinations include the Nazi abbreviations HJ (Hitlerjugend, Hitler Youth), NS (Nationalsozialismus, National Socialism), SA (Sturmabteilung), SS (Schutzstaffel) and KZ (Konzentrationslager, concentration camp). Some registration offices have overlooked this rule by mistake, however; there are a few cars registered carrying prohibited codes, such as B-SS 12.

Need some help coming up with your custom text? Here are just a few of our recent orders you can use for inspiration.  To check out more recent orders visit http://bit.ly/d1FM4W 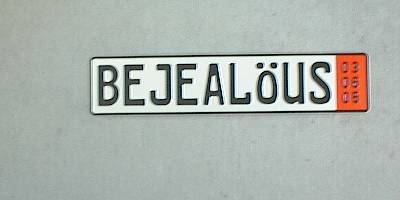 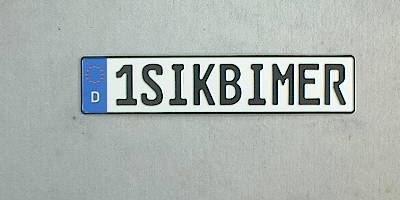 German car number plates show the place where the car carrying them is registered. Whenever a person changes their main place of residence in Germany, or buys a new car, they are required to buy new number plates. Number plates can be bought which are valid all year round or between 2 to 11 months within any 12 months. This allows people to change between summer and winter cars, such as a convertible and a sedan/saloon without having the time and money wasted for de- and re-registering. Emission test (front plate) and vehicle safety test (rear plate) stickers are also attached to the plate. 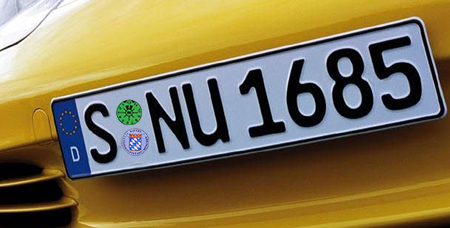 The expiry date can be figured out as following: The year is in the center of the sticker and the number on the uppermost is the month. The black marking on the side makes it easy for the police to see the expiring month from the distance. Imagine a clock, then the marking shows the same position as the face of the clock does. For example the black marking is on the left side, so it is the ninth month (or 9 o’clock) and hence the expiry date is 30th September. The colors are repeated every 6 years. The lower sticker is the official “seal” of registration, indeed, at the beginning of the 20th century plates were authorized with ink and a stamp. Motorcycles carry only the rear plate.